This is the plan of my layout.  It's around 11 x 8 (feet) and very simple - a double track high level mainline and a low level branchline with a sort of fiddle yard.  This picture reflects the extent of my drawing skills. The tracks are not quite as linear. The original layout drawing was not dissimilar which gives you some idea of the lack of planning which goes into anything I build.  I have a picture in my head of what I want the thing to look like but struggle to put it on paper or work out much of the detail in advance.  I haven't the patience. I just bodge it when I hit a problem.  The original drawing did not depict me sleeping.  I didn't know I'd be doing so much of it.  Lack of forethought again. 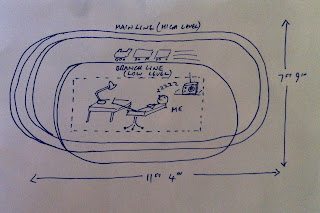 I had thought about a layout with lots of points and interesting operational possibilities, but came to realise I really didn't want that.  I wanted an excuse to try scratch modelling and watch trains go round and round and in and out of the landscape.  And I wanted to run any train from any era whilst pretending it was 1960 and I was eating a boiled egg with my dad and brother on the railway embankment at Weedon.

I read lots of books and articles about how the railway should fit the landscape and not vice versa.  I started out with good intentions but then got bored.  It was too restrictive - the idea of having everything pre-planned.  I wanted a town, a village, a bridge across an estuary, a viaduct and a canal and I was going to have them come what may.  And if it looked awful, I would rip it up and start again.  The result is beginning to look a bit patchwork. If and when I start another layout I will try to have a more unifying theme but for the time being, I don't really care.  I'm just enjoying the learning experience.

I may attempt a better drawing at some point. It's a chance to aimlessly while away time.
Posted by Chas at 8:17 AM