I had a wish to make much better trees for future projects. Until now I have used Woodland Scenics tree trunks covered with clump foliage - fine from a distance but not a patch on some of the trees I have seen produced by other modellers.

Having looked around at a few "how to build trees" tips on numerous websites (and there is some excellent advice around) I thought I would experiment.

One site suggested heather or sage bush so during a walk up Moel Famau I gathered a few bits of  broken off heather.  A few choice bits went into the microwave (as advised) for a few minutes, sufficient to kill any bugs or fungus but not enough to set them alight.  (The following picture is a serving suggestion only) 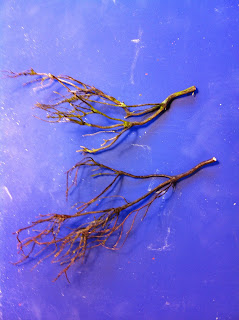 The bits were super glued together, roughly copying an ash tree..... 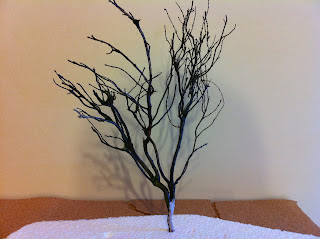 ....followed by the addition of a few sprigs of sea moss. The joins were covered with Green Scene flexi-bark. The trunk looked a bit thin for the size of tree so that was filled out with DAS then painted with acrylics. 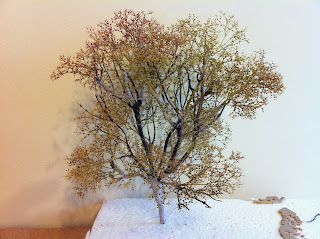 And a coating of Display Mount and Noch leaves to finish. 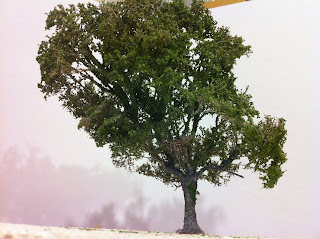 Time consuming, but I  am happy that this looks much better than earlier attempts.  Mrs Chas suggested using dried herbs instead of Noch leaves.  What a good idea!  I shall give it a go.   The next challenge is a generic conifer.

Addendum:  Geoff's comment below includes a link to one of his typically detailed master classes, this time on model trees.  It's a much better description than here!
Posted by Chas at 4:33 PM