What a challenging project this is turning out to be.  I have no idea how it will turn out but here, anyway, is a report on progress, warts and all.

The kind vicar had allowed me to take pictures and measurements and I found a brilliant android app which allows measurements to be entered onto a photograph. Now that's clever. I think so, but that sort of thing pleases me. 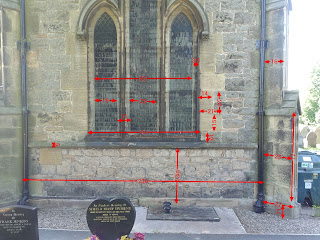 Of course, without incredible rubber man arms and a very long tape measure, estimating the height of the roof, tower and steeple (or anything above about 12/15 feet for that matter) is really hard because of foreshortening (if that's the right word) and the stone blocks being of variable size. In the end I have settled for something that looks about right for the nave walls and roof and will have a go at guessing the heights of the tower and spire once the nave is done.

So, beginning with the nave and after gratefully received comments on a previous post, the sides are of 30 thou styrene sheet.  The stone surrounds for the windows were cut out separately and scored - the window frame is slightly larger than the window aperture. 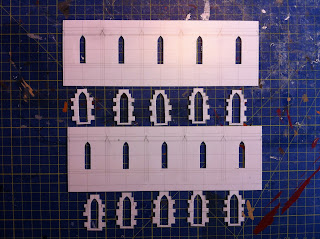 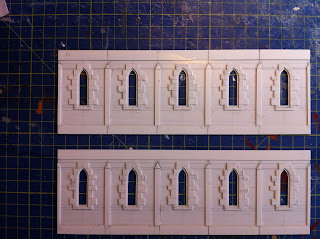 Onto the walls I added styrene strips at the bottom for the plinth, at the top for the whatever it's called and between the windows where the buttresses are.  (I haven't decided how I will make any of those yet).  The walls have been braced with Evergreen 10mm "I" sections.  That might be excessive but I took a guess that that this would be sufficient to stop the walls warping when the DAS was applied (as I have read can happen) and it seems to have worked.  The DAS was applied with PVA adhesive, rolled using a wallpaper seam roller (an idea I pinched from Iain Robinson), allowed to harden, sanded then scribed.  The stonework isn't quite right when I look back at the photographs of the real thing but I can correct that later.  I'm impatient to get on.  I did wonder whether 30 thou of DAS might be too thin but it seems to have taken fine.  Perhaps I will come down one morning to find it in little heaps. 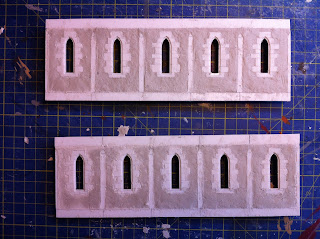 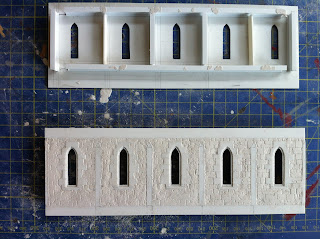 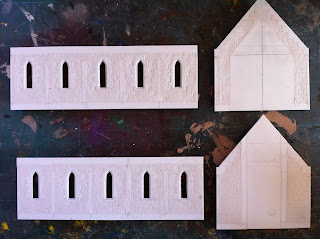 The end walls followed the same process but with extra styrene sheet where the chancel and tower will attach. 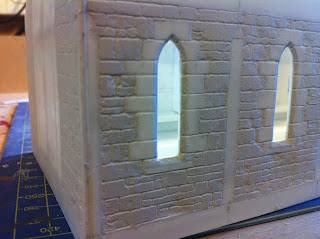 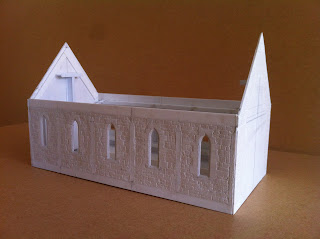 Now, windows.  I don't know what to do.  From the inside, the windows are beautifully detailed 19th century stained glass.  I'm not going to add the protective screens but how best to represent the real thing? 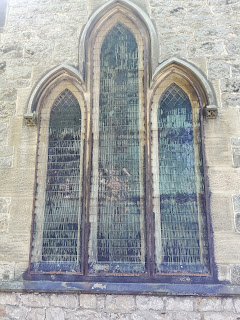