What with one thing another, including the local quarry running out of slates, and sitting in the brief sunshine,  progress has been sloooow.  But at least work on the roof has started. 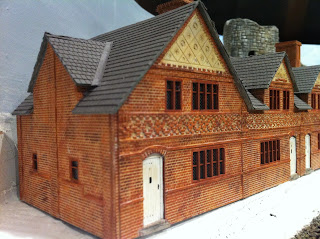 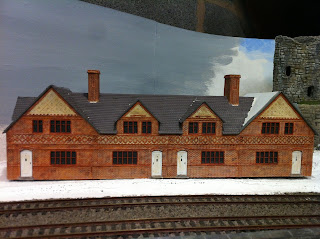 I was surprised to see that after a bit of painting, the flaws in the patterned brickwork appeared marginally less noticeable although not to the extent that it will bear close inspection.  Still it's an improvement.

The stonework in the gables presented a bit of a puzzle.  I thought about using Das but I really didn't fancy my chances of producing something which didn't look just clumsy.  (For a master class in using Das see Iain Robinson's blog, here for example).  After a bit of experimenting I settled on drilling holes in styrene sheet, filling them with Squadron putty and making a few indentations while still drying. 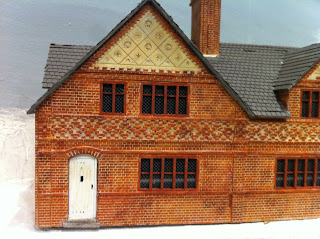 Still plenty to do - finish off the slates, add flashings, ridge tiles, gutters and downpipes, chimney pots, barge boards, final painting.  And hanging baskets.  Now that'll be interesting.  It's not going to be finished anytime soon.